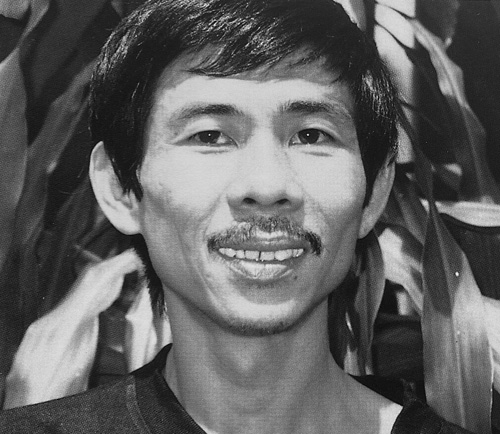 Tran Van Thao graduated from the Fine Arts Academy of Saigon in 1981. In 1997 he won the Philip Morris Prize and in that same year produced the painting featured in this exhibition. After that his practice evolved into pure abstraction. With Homme et Femme, Tran juxtaposes mythic representations. On one side, a woman is shown as an eternal, antique sculpture, while on the other side, a man pauses like “The Thinker”, Rodin’s famous sculpture. Tran was a prominent member of the seminal Group of 10 artists that served as a catalyst for the Vietnamese government’s recognition of abstraction as a legitimate genre of art. He continues to inspire new generations of artists in Vietnam to challenge the accepted (official) norms of what defines art in the country. Tran has participated in numerous exhibitions around the world and exhibited at institutions such as Singapore National Art Museum, Singapore; Fujita Vente Art Museum, Tokyo, Japan; Pusan Metropolitan Museum, Korea; National Art Gallery, Kuala Lumpur, Malaysia; Museo Biblioteca Archivio, Bassano del Grappa, Italy; and Centre Wallonie-Bruxelles, Paris, France. Tran has received numerous awards and prizes including the Starr Foundation Fellowship from Asian Cultural Council, where he spent four months as an artist-in-residence in New York City.